The audience, experts, researchers, activists, and artists interested in the issue connect with each other in the online public talk program. Therefore, the program expands discussions and discourses outside the exhibition space. It would reveal the many memories, emotions, and histories that have been hidden under the name of ‘criminal abortion’ and produce and expand related movements, discourses, and discussions. The public talk can be sensed spatially because the stage is installed between the chronological tables, which are the axis of the exhibition.

Here and now, we revisit the meaning of creating a chronicle of sexual and reproductive rights and setting a new flag. SHARE (center for Sexual and rigHts And Reproductive justicE) was created by the former Sexual and Reproductive Rights Forum. The former organization led the movement to abolish ‘criminal abortion,’ writing the book Battleground: Sexual and Reproductive Politics around the Criminal Codes on Abortion in South Korea (Humanitas, 2017). SHARE also participated as an artist in the design of the chronicles in this exhibition. We talk with activists and researchers in SHARE about creating counter-memories and history. We also hear about the reproductive problems screened by abortion crime for the excluded, such as queer women, women in facilities, etc. In addition, we discuss the deleted rights that did not come to the surface because of criminal abortion.


2. Who Will Write the History of Tears
: The Artivism from the black protest in 2016 to the enforcement of the total ban on abortion in 2021

In 2016, women across the country staged the mass demonstration “black protest” against the abortion ban in Poland. It expanded around the globe, including South Korea, and the Polish government withdrew the law. However, in January 2021, the Polish government imposed a near-total ban on abortions, which bans virtually all kinds of abortions, including the case of child deformity. We invite Sebastian Cichocki, the chief curator at the Museum of Modern Art in Warsaw, who is preparing for the exhibition that reflects the political situation in Poland, including the reproductive rights issue of women and minorities, to examine the current political situation in Poland and the contemporary artivism which passes through it. The exhibition titled Who Will Write the History of Tears, a sentence borrowed from Barbara Kruger’s work, will begin on November 26 at the Warsaw Museum of Modern Art.

3. Women writers who rewrite history in their own language and in their own way
: focusing on A War of Memories, My Embodied Memory, Born, Unborn and Born again, and The Flesh-Witness

The program talks about the attempts of women writers to weave personal history into public history through the recent works of Bora Lee-Kil and Kyuri Jeon, the participating artists. The two writers recently attempted to connect the historical events of Korean modern and contemporary history with their bodies, memories, and family histories in their several works, A War of Memories(Bora Lee-Kil, 2018) and Born, Unborn and Born again(Kyuri Jeon, 2020). Kyuri Jeon’s Born, Unborn and Born again and Bora Lee-Kil’s My Embodied Memory are the works to look back on the existing history by extending the right to bodily integrity to reproductive rights. Besides, Bora Lee-Kil’s A War of Memories and Kyuri Jeon’s The Flesh-Witness reinterpret and rewrite history from a non-male perspective and ask a question about public memory. This program listens to their attempts, meanings, and extensibility through a talk with Film Critic HyeYoung Cho.

HyeYoung Cho has been working on exploring image culture from a minority perspective. She is interested in feminist and queer film criticism and the relationship between labor and the aspects of images produced on digital platforms. In addition, she pays attention to performative images that cross the border between fiction and documentary and narratives and play of cinematic games. She has been working on planning a project and doing research about these interests. Currently, she is a member of ‘#project38’.

4. The body where art and politics cross
: About body ownership, bodily integrity, and the movement to legalize tattooing

In September 2021, Alexandria Ocasio-Cortez, the representative from New York, wore a dress emblazoned with the words ‘Tax the Rich’ at the Met Gala. Then she chanted a political message that the rich should be taxed. In June 2021, lawmaker Ho-jeong Ryu wore a purple dress showing tattoos on her back and held a press conference in South Korea calling for legalizing the tattoo industry. It combined with misogyny toward young female politicians and caused great controversy. Choosing and behavior about what to engrave on the body, how to wear clothes, and how to present oneself to others are cultural, artistic, and political acts at the same time.

She pointed out the problems of the system that regulates an individual body and fair labor. She also chose to call for legalizing tattooing and pronounce it in an artistic way as a politician. Doy (Do-yoon Kim) is a tattooist and the director of the Tattoo Union, which belongs to the chemical fiber and food union of the Korean Confederation of Trade Union. He questions stereotypes about tattoos and explains how unionizing as a worker leads to a revolution through the movement to legalize the tattoo industry.

Ragyeom Kang is an artist, a tattooist, and also a participating artist in the exhibition. She talks about the declarative meaning of engraving something on the body and shares experiences of practicing tattooing as a method of art. This is also an act that is sensibly connected to her work to break the oppression of gender stereotypes. We hear about bodily integrity and body ownership that art and politics cross from conversations with these three people. Moreover, we also talk about an act more artistic than the art itself and the meaning of artistic action in a place that requires political solidarity.

Ho-jeong Ryu was born in Changwon. She majored in sociology and worked in the IT industry. Her passion for the labor movement led her to work for the Confederation of Trade Unions. She decided to go into labor politics and ran for the Justice Party proportional representative parliamentary contest in 2020, where she won first place. Currently, she is the 21st member of the National Assembly, the member of the Trade, Industry and Energy Committee, and Special Committee on Ethics.

Tattooist Doy (Do-yoon Kim) is a culture and art worker who chose the human body as a medium for artistic expression. He created and worked with the ‘Tattoo Union’ for tattooists' labor rights.

Pre-research materials, publications related to the exhibition theme, a zine linked to the works of participating artists, etc., are presented. Visitors can see these at Boan 1942 Boan Bookstore (the second floor of the new building), where the exhibition is held. 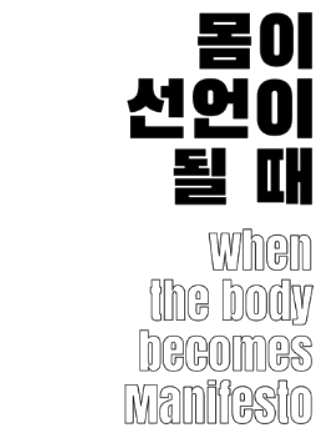